Robin: I’m Robin (Hohnholt) and I’m from Fort Worth, Texas.  I was watching a competition with the Ultimate Fighter and I was really impressed by one of the fighters, I thought what a great inspiration she was to everyone but to women and a variety of ages and so I watched the bought that night and said I want to make some changes so I got online and started seeking someone, a group or organization that might help me reach these goals and I found Elect Wellness.

Dietitian: The first meeting with Robin I remember her mentioning that obviously she was a flight attendant and on the road for many days at a time.  She relied a lot on more convenience, fast-foods, she had seen a UFC fight and just from there recognized areas for improvement for herself.

Trainer: During the first session we talked a lot about different injuries that she had and different concerns that she faced.

Robin: It’s the one-on-one, it’s their devotion and commitment to me.  At this point in the age in my life I didn’t want to be part of the large group, I wanted to customize and tailor just for Robin and that’s what Elect Wellness brought.  I guess it’s a journey with me, they wanted to see the success that I had and for lack of a better description, handholding, that really was important to me that I wasn’t just another person or customer.  I felt like we were connected and they were encouraging me and that was huge.

Trainer: She was very committed and wanted to go in head first and necessarily care as much about the explanations of why we did everything but the more sessions we trained and the more I talked to her the more she wanted to learn to the point where she was going out and getting like nutrition books to read up on her own so she could educate herself as much as possible.

Robin: The way my clothing feels on me, that was always a big deal to me.  Also, the nutrition was a very big deal for me.  I wanted to make certain I was making the right food choices.  The portions, it’s been such a huge success for me.  I look at a menu differently.

Dietitian: She thinks a lot more about food and planning things out and what she can keep on hand rather than just being more impulsive and just choosing something on the run.  She wanted detail, she wanted structure, and she put it into action pretty quickly.  She just needed some guidelines to follow.

Trainer: She was committed and she made that very clear from the first session.

Robin: One of the things that I would go to is this voice in my head that said you’ve got this, you’ve got this Robin and it worked.  I remember – and for me every month when we go through the assessments and I called it my report card, initially I wanted to shine for the dietician and the trainer and now I want to shine for myself.  It’s been life-changing for me and it’s a confidence builder and you should never sell yourself short, it’s very important. 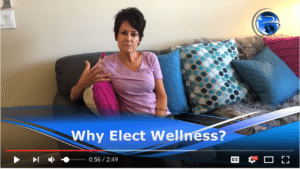