Elect Wellness » Dairy Production & Our Weight Problem: Are the Profits worth the Price? 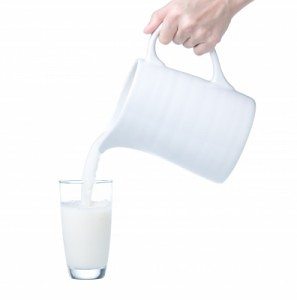 Business is about profit. Make no mistake. It is and it should be. The dairy business is no different. What could be more profitable than increasing the milk production per cow at a dairy farm? America figured it out, and between 1959 and 1990, US milk production doubled at the same time the number of dairy cows declined by 40%. The average dairy farm has about 100 cows. Imagine only having to keep 60 cows, and getting the production of 200 cows! If it was your business, you’d probably take that offer, as most owners have.

How did they accomplish this unnatural level of production? There are two major reasons. The first is purposeful breeding, and that by itself appears to not have a strong downside. The second reason for the incredible milk production, however, is the major reason for many dairy cow illnesses and has proven to negatively affect the health of the one who drinks their product. The secret is rBGH, or recombinant bovine growth hormone. This hormone increases milk production by 25%, but chemically alters the resultant milk, sending a wave or hormones though our own bodies with every drink. The growth hormone released into our bloodstream increases our chances of colon, prostate, and breast cancer, and at the same time, interferes with our own endocrine systems and the regulation of our weight.

The FDA, which approved rBGH in 1994, insists that it is harmless to humans. Interestingly enough though, the hormone is banned in Canada, as well as parts of the European Union, Australia, and New Zealand. Critics of the FDA’s decision point out the increased levels of IGF-1, or insulin-like growth factor, in the milk produced by these hormone-treated cows.

These cows’ drug problems didn’t start there, either. If farmers can make all their cows ovulate at the same, it is much more economical for business. How is that done? More hormones: prostaglandin, gonadotropin releasing hormone, and progesterone, sold for more nice profits under the brand names Lutalyse, Cystorelin, Estrumate, Factrel, Prostamate, Fertagyl, Insynch, and Ovacyst. These help the dairy farmer time the management of his milk production.

The overworked, over-producing, over-injected cows can usually only put in about 5 years worth of work before they are sold to slaughter. About 20% of US beef comes from used-up dairy cows, many times complete with mastitis and Johne’s disease.

I, like many personal trainers, used to be an avid milk promoter. However, time and experience with a variety of individuals has silenced my endorsements. Though it is a decent protein source, you may be better off avoiding it altogether – especially if you have problems with allergies, asthma, or arthritis. If you really want to continue drinking milk though, going organic may be well worth the extra expense.